Whenever he is told of good news, Fr. George Lane, S.J. (President of Loyola Press) immediately responds by saying, “Thank you, Jesus!” What a great example he sets!

So, having been blessed with a successful evening for our first Confirmation intensive last night, my first response is just that: “Thank you, Jesus!”

Attendance was almost perfect (the kids know by now that if they miss, there’s a make-up, and it’s usually not much fun!). The 2 hours went by quickly and the kids had PLENTY to do. First, with my own class, we once again did our little procession and ritual of setting up the prayer center and Advent wreath to the sounds of O Come, O Come, Emmanuel…they were very prayerful and respectful. As part of that procession, they also received their Confirmation book (Confirmed in the Spirit).

Then, the fun began! The kids went through five 10-minute modules – one with each of the 8th grade catechists – where they (the kids) had to complete a task. 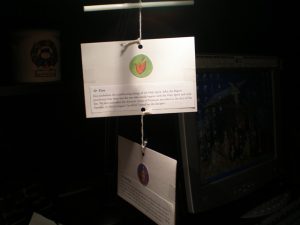 In my room, they made a mini-mobile of 4 signs of the Holy Spirit: water, anointing, fire, and a dove (using pg. 5 of Confirmed in the Spirit).

In Jim’s room, they worked on a Blackline Master from the Confirmed in Spirit Catechist Manual that had the kids looking up passages in the Bible about the Holy Spirit.

In John’s room, they worked on a crossword puzzle that asked them to identify the Sacraments of Initiation and the signs and symbols of those sacraments. 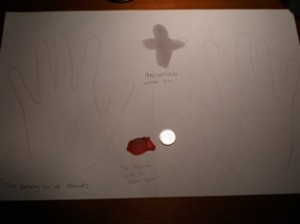 In Mary Kay’s room, they traced their hands on a large sheet of paper as Mary Kay told them about the Laying on of Hands at Confirmation. Then, they dipped their thumbs in vegetable oil and traced a cross on the paper as Mary Kay taught them about the anointing with oil. Finally, Mary Kay dripped some melted wax onto each sheet and, after it cooled and dried somewhat, had the kids make an impression in the wax with a holy medal as Mary Kay explained the words, “Be sealed with the Holy Spirit.” 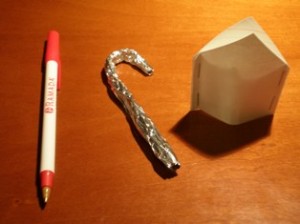 Finally, in Chris’ room, the kids made a miniature miter and crosier as Chris explained the role of the bishop at Confirmation. (this pic shows the prototype I made at home…the actual miters they made were bigger and made out of red construction paper)

The only fly in the ointment was that it was hard for the kids to complete the mobile in 10 minutes so we ran into a little backup as the kids were switching classes. But it was no major problem. The moving around kept the kids on their toes and the tactile activities kept them engaged. At the end of the evening, each of us, back with our own classes, asked the kids to summarize what they did and learned in each class and we were pleased that the kids were able to do so with ease. Mary Kay went as far as to tell her class that “nobody leaves until they tell me one thing they did tonight and what they learned from it!” and she said they were able to do so quite well without simply repeating what others said.

In talking among ourselves after the session, each of the 8th grade catechists was very pleased. We thought of a few tweaks here and there but overall felt like it was an effective evening. We wished each other a Merry Christmas and look forward to jumping right into our next intensive on January 5.

The Cross – Our Trophy

More About My First Session