I had planned to be a “Grinch” last evening and skip taking my class to the Christmas pageant that the first-graders were putting on. I figured that my kids wouldn’t know about the pageant since I hadn’t said anything about it and I would have one more full session before Christmas break to complete the seven Sacraments.

I forgot that many of my students have younger siblings!

The first girl that came in asked, “Are we going to the Christmas play?” to which I responded “Probably not, we have a lot of work to do.” “Oh please, Mr. Paprocki, PLEEEEAASE!!!!” At this point a few other kids arrived and said they had younger siblings in the pageant. How could I say NO at this point! So, alas, the Grinch’s heart grew 3 sizes last night and I took my kids to the pageant, but not before being able to do a quick 30-minute lesson on the Sacraments. Here are a few highlights:

In all, a fun night and nice to look forward to a couple of weeks off!

God Asks Us to Obey 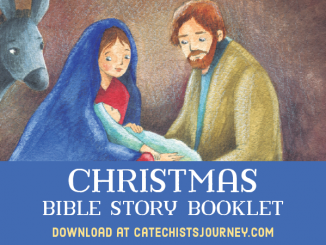