Last evening, at our end-of-the-year catechist meeting, my favorite part was when our DRE, Arlene, invited catechists to share stories of highlights or “Aha!” moments from this past year. It was very heart-warming to hear people sharing stories of how they connected with the kids they taught in the past year.

One catechist, in particular, talked about how he made a prayer box for his 7th graders and invited the kids to write prayer intentions on slips of paper and to drop them in the box throughout the year. As soon as he had begun the practice, he thought he would regret it, thinking that his 7th graders would just be writing silly things on the slips of paper. To his amazement, at the end of the year, when he went through all of the prayer slips, NOT ONE was silly…they were all for very serious, touching, poignant issues that the kids were bringing to prayer!

Another catechist talked about how the Associate Pastor’s visits to his 3rd grade classroom became one of the kids’ favorite things and how they asked him to pray for people in their families that they were concerned about. He said it could make you cry!

Finally, a catechist in his 2nd year talked about how he did not enjoy his first year as a 7th grade catechist but came back to give it another try and to really engage the kids. He said that one of the most meaningful activities he did was having the kids create posters about the Beatitudes. Without exception, at the end of the year, every one of his students indicated that the Beatitudes project was their favorite part of the year!

What story would you like to tell about this past year?

Stories on the Journey, Week Four: “Oopsies! I Goofed”

Week Three of Stories on the Journey – Touching the Sacred 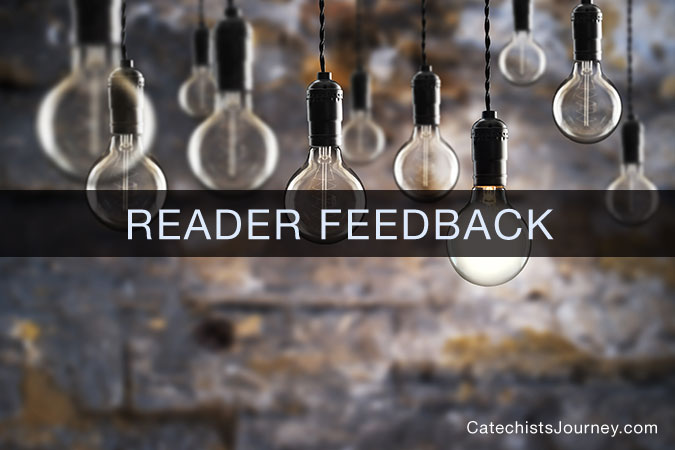 My, How Long You’ve Been a Catechist! (Poll Results)

12 Comments on Telling Stories on the Journey