I was delighted to discover last evening that my 6th graders had retained a great deal of what we covered during the year! In essence, I really emphasized 3 main topics this year: Old Testament stories, the Ten Commandments, and the Sacraments. Last night, we did a review of the Old Testament stories and it went very nicely. Here’s a pic that sets the stage: 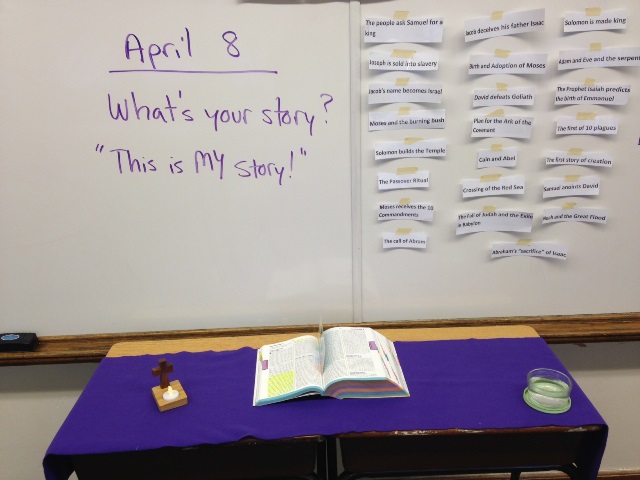 On the board is the theme/big idea for the session and in the foreground is our prayer table (before the young people added their symbols in the opening procession). To the right, I taped on the board, in random order, the names of ALL of the Old Testament stories we covered this year. The young people had to come forward one at a time, choose the next story in chronological order, move it to the other side of the board to create a timeline, locate the story in the Bible, and tell the story in their own words!

In all, it took about 45 minutes and every child was involved in coming forward to show what they know. It was very enjoyable hearing them tell the stories in their own words! One young man said that when God sent the plagues upon the Egyptians, he was showing how “creative he could be!” Another said that, when the angel appeared to Abraham to stop him from sacrificing his son Isaac, that the angel said, “the joke’s on you!”

Anyway, it was refreshing to see that they knew the stories we covered and could locate them in the Bible. That’s more than I could do when I was in 6th grade!

At the end of class, the kids came forward one at a time to prayerfully retrieve their faith symbol from the prayer table to take home with them, now that our year is coming to an end. That was a very special moment.

We have no class next week because of Holy Week and then we have our Mercy Experience to Ronald McDonald House on April 21 which leaves April 29 as our last full session together before a closing Mass on May 6!

Why Does God Refer to Himself as a “Jealous God?”

Getting Started as a Catechist

Q & A from Yesterday’s Webinar

2 Comments on This is MY Story!