Have you ever noticed that many heroes in popular culture are loners? These heroes save the day, but they tend to do it all by themselves. Think of Batman, Superman, Ironman, Wolverine, and for those of us who are a little older, the Lone Ranger. Our heroes tend to be rugged individuals who, even if they engage in an alliance or loose affiliation with others, do so reluctantly. A good example of this is Han Solo from Star Wars fame. While he does have his companion Chewbacca, Han Solo embodies the myth of the rugged individual who prefers to save the universe on his own. Even his name embodies the myth of individualism: Solo!

Individualism is one of the most pervasive values in American culture. We value independence. Success, in our culture, tends to be attributed primarily to the hard work and perseverance of the individual. By the same token, it is no surprise that we are experiencing an epidemic of despair and depression since, as isolated individuals, we tend to conclude that any experience of failure must be solely our own fault. We are a culture that runs the risk of losing its sense of a common purpose and the common good. Instead, we find ourselves experiencing increasing alienation, divisiveness, loneliness, and lack of identity, lack of purpose, and lack of hope.

In this Sunday’s Scripture readings, we are reminded that to be a follower of Jesus is the opposite of being a rugged individualist; it is to be a member of a community of faith. Jesus himself was not a rugged individualist. While he may have spent 40 days in solitude in the desert, the first thing he did upon emerging from that experience was to assemble a team—his 12 Apostles—with whom he spent the next three years of his life.

Our Scripture readings this Sunday speak to the importance of community.

As followers of Jesus, we are called to participate in a community of faith—the Church. For Catholics, faith is not a “me-and-God” experience, but rather a “we-and-God” experience. In this Sunday’s Gospel, Jesus reveals his glory in the midst of a community feast. Following Jesus and recognizing God’s glory in daily living is not an individual experience but a communal one. May we as a Church, especially in our local parishes and faith communities, grow as one Body in the One Spirit and become a people in whom the Lord delights!

The Gospel is More Than “Chicken Soup”

Third Sunday of Lent, Year A: Mercy Without Limits 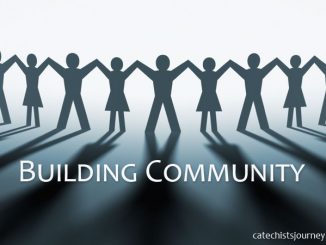 How to Build a Sense of Community in Your Learning Space