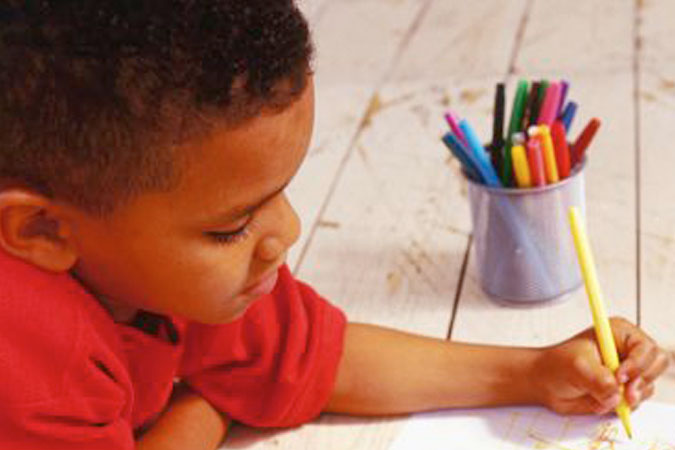 With the end of Lent and the beginning of Easter, we transition from a season of penance into a season of joy, and I wanted to help my fourth-grade class think about this transition. I began by asking them to draw a picture of what they did during Lent. This picture did not have to be fancy; it could be a drawing of what they gave up or something they did, such as praying the Stations of the Cross or performing a service project. If any students had trouble coming up with an idea, I told them that they could draw a picture of themselves at prayer.

After a short while, I asked them to turn the paper over and close their eyes as they thought about Easter. I then asked the following questions: Did your family attend Easter Vigil or Easter morning Mass? Did you feel joy when you heard Alleluia at Mass for the first time in weeks? Did you smile when you thought of the women discovering that Jesus’ tomb was empty? Did you celebrate Easter in a large family gathering? I then asked the children to draw a picture of themselves celebrating Easter or the joy they felt when they thought about Jesus’ Resurrection.

Some of the kids asked questions about Lent and Easter while they were drawing, which offered me the opportunity to review the basics of both liturgical seasons. It also gave me the chance to emphasize the importance of Easter. I explained that Easter is not a day in which we hunt for Easter eggs; rather Easter is a season when we celebrate Our Lord’s Resurrection and his victory over sin and death.

Several of the students couldn’t wait to show off their pictures, so I gave everyone who wanted a chance to share their work with the class. Many of the drawings illustrated the contrast I was looking for with this exercise. One side showed the solemnness of Lent, with pictures of the kids giving up something or having to say no to something they really wanted. A few drew pictures of themselves helping others. The other side featured bright colors that alone told viewers this picture was one of joy and celebration. One student drew herself jumping out of bed on Easter morning saying both “Alleluia” and “Candy” as she rushed for her Easter basket; another drew a picture of herself with a rainbow in a field of flowers with a big smile on her face.

These happy pictures were a good way to discuss the meaning of Easter and talk about how we might continue this feeling of joy throughout the season of Easter and the rest of the year.

How do you discuss the meaning of Easter with your students? How do you celebrate the joy of the Easter season with the children in your class?

The Healing Effect of Oil

1 Comment on Drawing the Joy of the Easter Season