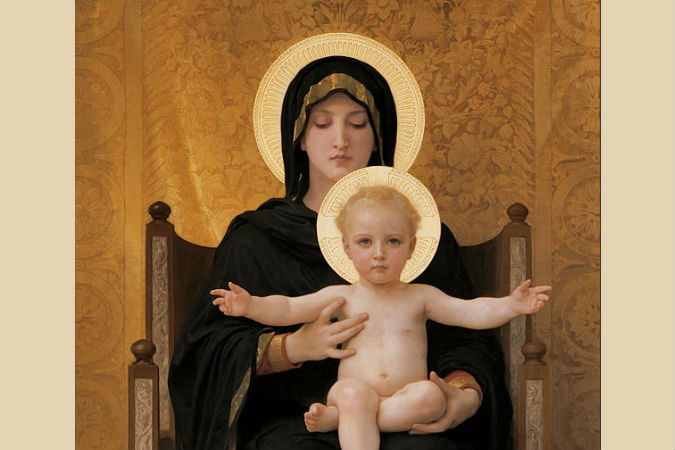 As we approach the celebration of the Feast of the Immaculate Conception, it is important to remind ourselves that Marian feasts are not primarily about Mary! In fact, the Blessed Virgin Mary would be the first to resist our efforts to draw attention to her. Her great Magnificat prayer proclaims that it is the Lord who is to be magnified. Like all Marian feasts, the Feast of the Immaculate Conception is ultimately about Mary’s Son, Jesus.

This notion was captured beautifully in a famous painting by William Adolphe Bouguereau titled Madonna of the Lilies (1899), in which Mary is depicted as holding up the child Jesus in front of her for all the world to see. In fact, in the painting, Jesus’ face eclipses the face of his mother, and Mary’s eyes are humbly cast downward, her expression saying, in essence, “It’s not about me.” Meanwhile, Jesus is front and center (where Mary knows he should be), and his eyes are wide open and looking directly ahead with his arms outstretched to the world.

This is not intended to depict Mary as a demurring figure but rather seeks to capture the essence of discipleship for all of us: it is not about us; it is about Jesus. Like Mary in this depiction (and in many icons), we catechists are called to hold up Jesus to the world—not drawing attention to ourselves, but rather, inviting people’s attention to Jesus.

As we know, the Immaculate Conception does not refer to the Virgin birth of Jesus, but rather, to Mary being conceived without Original Sin. In other words, at her conception, Mary received the sanctifying grace that we receive in Baptism after our birth. More simply put, the Immaculate Conception teaches us that Mary, like the rest of us, was redeemed (saved) by Jesus, except that, in her case, it was not a “cure” (as it is for us) but a “prevention.” This feast is a reminder that none of us—even Mary—can redeem ourselves; it is always through God’s initiative that we are saved.

As we celebrate the Feast of the Immaculate Conception, may we, like Mary, recognize how blessed we are to be redeemed, not by our own efforts, but by God’s intervention in our lives at each and every moment. And may our souls magnify the Lord and our spirits find joy in God our Savior!

Image: Virgin and Child by William A. Bouguereau. Art Gallery of South Australia [Public domain]. See the Madonna of the Lilies referenced in the article here.

The Spirituality of the Catechist: Devotion to the Blessed Virgin Mary (Online Retreat Week 7)

The Feast of the Assumption—A Blessing of the Body