For the first 4 weeks of the program, I was working without an aide. Each time the DRE thought she had someone lined up, they would back out at the last minute. (Further evidence that recruiting catechists and aides is one of the hardest parts of the DREs job!). Finally, last night, I walked into class and there was my new aide. I broke into the biggest smile. Let me tell you why.

2 years ago, I taught along with Patti, and we had a rather difficult group of 8th graders. One young man (you can see where I’m going with this!) in particular was a handful. I’ll call him Bob. Suffice to say, Bob was not exactly the embodiement of piety and reverence as an 8th grader! I recall one time when Patti and I were lamenting our difficulties and Bob’s name came up, I half-jokingly/half seriously said, “Watch, he’ll be the one who comes back as an aide in a few years!”

Lo and behold, when I walked in and saw Bob there, I was absolutely tickled. He is now a sophomore at a Catholic high school (says he loves it there) and is more mature, sociable, and polite than ever. I told him I was delighted to have him as my aide and he looked happy, enthusiastic, and comfortable with the kids as the class went on.

After class, the DRE, Bob, and I were talking and I told them both the above story. We had a good laugh but what was “funny” was that the DRE did not remember that Bob was in my class a couple of years ago. She just happened to bump into him recently and he said he was looking to complete some service hours and wouldn’t mind being an aide. She knew I needed an aide and the connection was made!

The Holy Spirit is clearly at work here!

So, don’t lose hope over those difficult students in your class. They just might return in a few years as your aide, as a fellow-catechist, or even as your DRE! 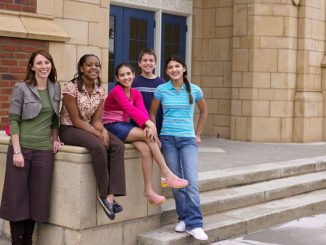 Transforming Your Catechist Aide into an Apprentice

Ask for What You Need

2 Comments on Guess Who My New Aide Is?