At this past week’s session, I focused on the question of “Who Is Jesus?” – a theme we will carry throughout the unit we are on. I played a recording of the song “Superstar” from the rock opera Jesus Christ Superstar in which the very confused Judas asks the question: “Jesus Christ, Jesus Christ, who are you what have you sacrificed? Jesus Christ, Superstar, do you think you’re what they say you are?” I talked about how the character Judas in this musical is clearly confused over Jesus’ identity and that this is what led him to betray Jesus – not recognizing him as the messiah, the Son of God.

I held up a picture of Jesus and told the young people to imagine that my aide and I were non-Christians who wanted to know “who is this man?” I asked them each to stand up and one by one tell me something about the man in the picture. They did a nice job of saying things like:

and so on. If they gave an acceptable answer they could sit down. This came in handy for the couple of wise guys who thought answers like “he had a beard” were going to be acceptable! Anyway, it would have been interesting, if we had time, to continue going around the group, attempting to exhaust what they know about Jesus! Perhaps we could have gone on all night!

I told them that, in Mark’s Gospel, people keep asking the question, “Who is this man?” and that eventually, Jesus puts the question to his apostles, “Who do people say that I am?” and “Who do you say that I am?” When I told them that Peter answered, “You are the messiah!” the girl who had given that answer during our little exercise above was very proud! I explained that Jesus is putting this question to us and that we need to reflect on our answer – is Jesus just a heroic figure, a great teacher, a “swell” guy – or is he our Lord and Savior, the Son of the Living God?

All of this served as a prelude to the Powerpoint meditation on images of Jesus that I posted about last week. It was a very prayerful 10 minutes that took us up to the end of class. When we gather next, we are going to watch the segment of Jesus of Nazareth that depicts the crucifixion and resurrection of Jesus – the events that reveal Jesus’ true identity (“Lord, by your cross and resurrection…”) 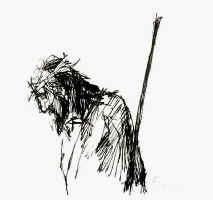 We’re off this coming Monday for Columbus day. Have a great weekend!

P.S. A great big happy shout out to the good folks in Waterloo, Iowa who hosted me on October 8 for a couple of Catechist Toolbox presentations for the Catholic schoolteachers and catechists of the Waterloo diocore (a regional grouping of parishes). I had a wonderful time and I appreciate your hospitality!

Print Friendly
About Joe Paprocki 2598 Articles
Joe Paprocki, DMin, is National Consultant for Faith Formation at Loyola Press, where, in addition to his traveling/speaking responsibilities, he works on the development team for faith formation curriculum resources including Finding God: Our Response to God’s Gifts and God’s Gift: Reconciliation and Eucharist. Joe has more than 35 years of experience in ministry and has presented keynotes, presentations, and workshops in more than 100 dioceses in North America. Joe is a frequent presenter at national conferences including the Los Angeles Religious Education Congress, the Mid-Atlantic Congress, and the National Conference for Catechetical Leadership. He is the author of numerous books, including the best seller The Catechist’s Toolbox, A Church on the Move, Under the Influence of Jesus, and Called to Be Catholic—a bilingual, foundational supplemental program that helps young people know their faith and grow in their relationship with God. Joe is also the series editor for the Effective Catechetical Leader and blogs about his experiences in faith formation at www.catechistsjourney.com.