No class tonight because of Columbus Day. I was thinking yesterday that it will be unusual to have a Monday night off. Then, I was looking at the Chicago Blackhawks’ schedule and saw that they are playing a home game tonight and I thought to myself that it’s unusual for the Hawks to play a home game on a Monday night…but at least I’d be home to watch the game on TV.  Then, at 10 pm last night, I got a phone call from my brother Tom, asking me if I would like to join him at the Blackhawks game Monday night!

Anyway, as it turns out, my brother Tom was out for dinner with NHL referee Kerry Fraser who is on the Advisory Board for an organization called Catholic Athletes (“Cathletes”) for Christ (CAC). Kerry has been officiating NHL games for almost 30 years and is the NHL’s most senior referee. Tom thought I would enjoy meeting him so apparently we have a pass to the Referee’s room following the game! (Hey, if you’re not gonna get a chance to meet some players, at least meet a ref for Christ!)

Go Hawks! (guess I’ll have to refrain from booing the ref tonight!) 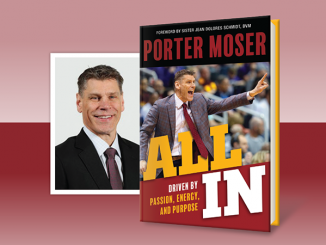 Bringing Sports and Faith Together: “All In” by Coach Porter Moser

Does God Decide Who Wins Based on Our Prayers?

3 Comments on Catholic Athletes for Christ