Interesting post on Deacon Greg Kendra’s blog today about the dearth of Catholic influence in the arts today: Catholic Artists are Virtually Invisible. I would disagree with Dana Gioia’s conclusion, however, that American culture is to blame. While there may be some truth to that, I believe we have no one to blame but ourselves. I don’t think we encourage artistic expression in catechesis as much as we should. As a child, I remember drawing, coloring, and even painting pictures (water colors, or course!) of Gospel scenes, especially the Crucifixion and Resurrection. When I was a parish DRE, I was lucky enough to inherit a program that included an arts and crafts catechist as well as a music catechist and we continued during my 7 years there to engage the children in art and music in addition to their “textbook” lessons.

For the past few decades, however, the catechetical enterprise has, in many ways, turned its nose up at anything “artsy,” considering it to be fluff. While we indeed did need to improve our focus on teaching doctrine, we have created an atmosphere that is suspicious of anything that doesn’t include doctrinal text. I’m not advocating that we go back to making catechesis a “burlap and butterflies” experience (if, indeed it ever was that), but I would hope that we do more to stimulate the Catholic imaginations of those we are teaching.

In the introduction to Laurine Easton’s book Crafting Faith: 101 Crafts to Help Kids Grown in Their Faith, I wrote the following:

Did you know that the Bible begins with a craft activity?

us how, out of the divine imagination, God crafted the heavens and the earth, the stars, the sun, the moon, the oceans, plants, and living creatures, culminating in the crafting of human beings. Simply put, crafting is the art of creating an object with skill and careful attention to detail. Creation is nothing other than God’s craft-work. Made in the image and likeness of God, we human beings are driven to create. Crafting is a way of participating in the creative nature of God and in the Divine imagination.

Crafting has a long a privileged place in religious education. The making of crafts allows children (as well as people of all ages) to concretely and creatively express their understanding of the faith and of their relationship with God and the Church. Art is a “language” that we use in religious education to “bring the divine to the human world, to the level of the senses, then, from the spiritual insight gained from the senses and the stirring of the emotions, to raise the human world to God, to his inexpressible kingdom of mystery, beauty, and life.” (NDC 37B1).

Likewise, in 2000, Pope John Paul II hosted six hundred artists at the Vatican as part of the celebration of the Jubilee Year. In a letter he wrote to artists, the Holy Father said the following:

“In order to communicate the message entrusted to her by Christ, the Church needs art. Art must make perceptible, and as far as possible attractive, the world of the spirit, of the invisible, of God. It must therefore translate into meaningful terms that which is in itself ineffable. Art has a unique capacity to take one or other facet of the message and translate it into colours, shapes and sounds which nourish the intuition of those who look or listen. It does so without emptying the message itself of its transcendent value and its aura of mystery.”

What thoughts do you have about the place of art in catechesis (other than “we don’t have enough time as it is!”)?

P.S. Here’s an example of art in catechesis from St. Julie Billart Parish in Tinley Park, IL…the cover of the parish bulletin and pages 15 and 16 show examples of children’s renditions of the story of Jesus being tempted in the desert. Kudos to DRE Pat Kmak.

Promoting Catholic Identity, Part 5: An Attitude of Faith and Hope 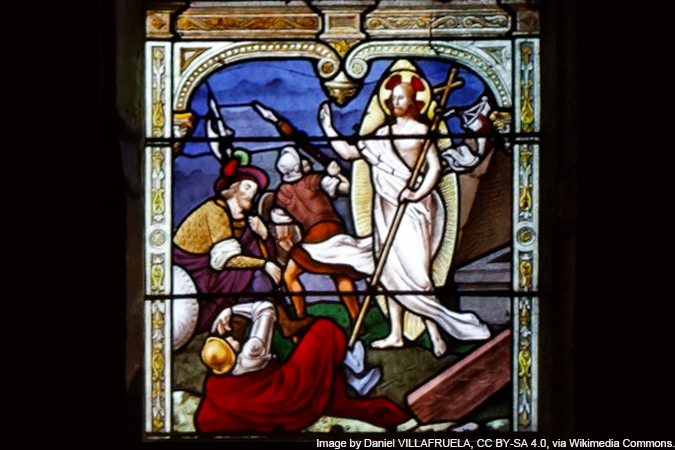 The Glorious Mysteries: The Resurrection and Hope in the Darkness