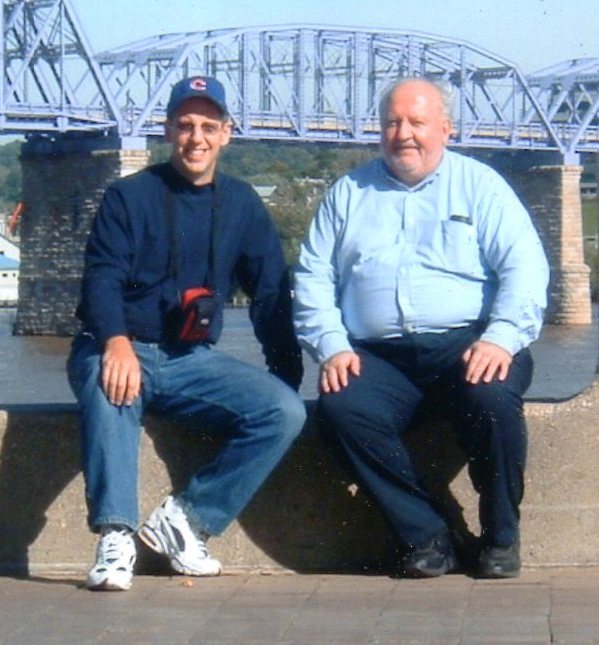 Please join me in praying for the repose of the soul of Tom McLaughlin, one of the most brilliant catechetical minds I’ve ever known. I benefitted immensely from “sitting at his feet” over the years. Tom passed away this morning at the age of 64.

I met Tom when I was a baby DRE in 1991. I attended sessions at the Office for Catechesis to learn about my new ministry as a catechetical leader. Tom was one of the presenters, impressing upon us newbies the importance of striving for professionalism and the need for just remuneration in our ministry.

6 years later, I had the pleasure of joining Tom at the Office for Catechesis in the Archdiocese of Chicago and setting up my office next to his. We became fast friends, sharing a love for things like Star Trek, the Cubs, camping, and, of course, catechesis. When he left to go to Loyola Press, I followed within a year and our friendship continued to grow.

Needless to say, Tom was unique. After a brief “stint” as a monk, Tom got a job as a janitor in a Catholic Church. When help was needed in the religious education program, Tom stepped in an never looked back. He was incredibly brilliant and yet enjoyed simple pleasures. He’s the only person I know who would read Church documents while watching Buffy the Vampire Slayer on TV. He would often make off-the-cuff remarks about things like having a new insight about the Catechism of the Catholic Church as he read it through for the 3rd time, as though he assumed everybody read the Catechism multiple times.

Every day was an adventure with Tom because you never knew what was going to come out of his mouth. You could always count on him blurting out a comment at a meeting that would ease the tension and send everyone rolling on the floor (or at least rolling their eyes). Outside of the work place, Tom and I enjoyed many great moments together. One of them was camping at Starved Rock State Park where he tied his hammock between 2 trees, invited me to lay down in it, and laughed uncontrollably when the hammock came loose and I went tumbling to the ground.

Another was getting in the car and driving to Cincinnati in 2003 to watch the Cubs play when it appeared they might be closing in on that elusive World championship. We drove in the morning, took in the ball game, drove home, and showed up at work the next morning after about 2 hours of sleep! Tom was a die-hard Cubs fan and kept a schedule on his desk, coloring in wins and losses each day. The day after the “Bartman” fiasco occurred at Wrigley Field in the 2003 playoffs, Tom and I went to Graceland Cemetery in Chicago to “pray” at the grave of William Hulbert, the first president of the National League, hoping the Cubs would pull out a game 7 victory. No such luck.

My favorite, however, is the day I invited Tom to stay at my house after work until the presentation he was giving that night at a parish in my neighborhood. When my daughter came home from grade school, she came running into the house telling me, “Dad there’s some old man sitting in the back yard reading a book!!!”

At Loyola Press, Tom made many incredible contributions, not the least of which was writing the entire Glossary for the Finding God curriculum! He was also instrumental in the creation of the Confirmed in the Spirit Confirmation program.

Tom left Loyola Press in 2009 and returned to the Office for Catechesis, however, his health began to deteriorate rapidly (Tom suffered from diabetes). As the years went by, dementia began to set in. On more than one occasion I made arrangements to get together with him only to have him forget. As his health deteriorated, he became more and more of a recluse. The last time I saw him was about a year ago when I visited him in the hospital after he had a heart attack. Something told me then I might never see him again and I kissed him on the cheek as I said goodbye.

Through another good friend, I kept tabs on Tom and learned just a week or so ago that he had taken a turn for the worse and was not expected to live long. The news of his passing came this morning.

Tom was the last person that I could honestly call a “best friend.” In life, most of us are lucky to have several best friends. I have many good friends, and numerous acquaintances, however, when it comes to best friends, aside from my wife, I really only count a friend from childhood and another from high school. Unfortunately, however, the opportunities for us to see each other are infrequent due to distance. Tom was a best friend that I got to see every day for about 12 years and I give God thanks for each and every one of those days and for Tom.