Last evening turned out to be a very lovely evening with my sixth graders. First, we gathered in Church for the Opening Mass with the pastor. I was able to recall many of my students by name as they arrived and that always makes them light up. They were well behaved during Mass (as I’ve mentioned before, almost too well-behaved, meaning that they are so passive and hardly respond to the parts of the Mass, but I’ll take that over misbehavior). I was asked to be an Extraordinary Minister of Holy Communion which is always a great honor and is great witness for my students.

After Mass, we headed to our room. Since we only had 15 minutes left together, I made it very informal. We sat around the table and I tried to remember all of their names and they enjoyed watching me struggle. In the end, however, I truly missed only one! Then I had them volunteer naming all of their classmates and two of them did so instantly (remember, they are not all from the same school so I thought that was pretty good).

Then, I had them share the objects that they brought in for our prayer center and I was delighted that all but two remembered. (Two were absent last night and one was not present last week and did not know about the assignment.) It was really wonderful. The kids brought in some beautiful objects (rosaries, medals, seashell, figurines) and offered brief background and information on why they chose that particular object. Here’s a pic: 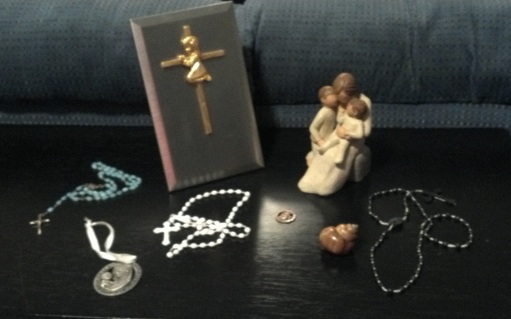 When we were finished with that, I distributed their Bible Basics Assignment and went over it with them and asked for examples of books, characters, and stories from the Bible and they did quite well. I told them they could do this with their parents but not with a Bible! I also told them about the Learning Stations coming up next week and they seemed excited about that.

To end, we stood and prayed the Nicene Creed which is on the back of their folders.

After class, I met with the other two sixth-grade catechists and we talked over the Learning Stations and did some strategizing. It’ll be fun to team with them next week.

On my way home, I realized that I forgot to put the tables and chairs in the library back in order and it was too late to go back…the building was locked. I sent an e-mail to my DRE to notify her and to apologize. My apologies to the librarian at Most Holy Redeemer school who had to move tables and chairs in her room this morning because of me! I’m sincerely sorry! 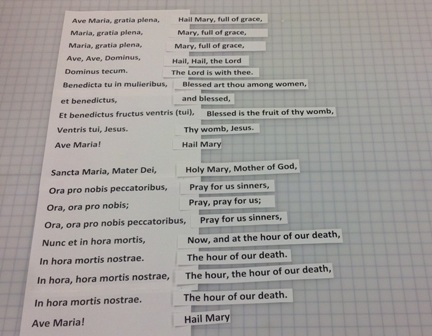 The Psalms: The Sound of Music Returns!