Advent is, above all else, a season of hope—a virtue that is all too rare in our world. To live as a person of hope is to behave in such a manner as to draw suspicion that we are behaving somewhat erratically as far as worldly norms go. This new type of behavior—what some may even call erratic behavior (the behavior that led people to conclude that the Apostles were “under the influence” on Pentecost)—is characterized by nine attitudes. I call them 9 Advent Attitudes. Today, we look at Advent Attitude #8. (Drawn from my book, Under the Influence of Jesus: The Transforming Experience of Encountering Jesus.)

We don’t use the word meek too often nowadays. For me, the only time I heard this word when I was growing up other than in the Beatitudes (“Blessed are the meek”) was in the Wizard of Oz when Dorothy introduces herself to Oz, the great and powerful, as Dorothy, “the small and meek.” So, naturally, I grew up thinking that to be meek was to be the opposite of powerful: weak and powerless. If I was looking for someone to go up against the great and powerful Oz, I’d pick Barabbas over Dorothy any day. Surprisingly though, there is a popular phrase that says, “If you think meek is weak, try being meek for a week.”

In Scripture, meekness is not weakness and has no affinity for cowards. Rather, it is a quiet strength acquired through self-discipline. In NHL hockey, it would be the equivalent of the player who receives the Lady Bying Memorial trophy which goes to the player who combines sportsmanship and gentlemanly conduct with excellence in the game. Among NHL greats who have won this trophy are Wayne Gretzky, Bobby Hull, Stan Mikita, Pavel Datsyuk, Alex Delvecchio, and Mike Bossy and, if you know anything about any of those players, you wouldn’t dare call any of them weak. However, they did indeed embody the Scriptural characteristic of meekness in their approach to the game. They could take a hit—even a dirty one—and just keep on playing the game instead of retaliating and ending up in the penalty box along with the goon that roughed them up in the first place. And thus, we explore Advent Attitude #8: Remaining Even-Keeled.

Unfortunately, since Jesus is described as being meek in the Gospels (Matthew 21:5), we often wrongly see him characterized in art as looking weak. Not just weak, he too often looks like a wimp. But Jesus was certainly no wimp. As a carpenter, he would be the equivalent of a modern-day construction worker, hard hat and all. When he called himself the Good Shepherd, we need to recall that a shepherd was the equivalent of a cowboy. Jesus stood toe to toe with the most powerful men in society and never backed down. Even as he faced the abuse and taunts of his executioners, he did not cower, nor did he strike back. Rather, he absorbed their most ferocious blows, patiently trusting that God had something greater planned for him. Smart hockey players will tell you that the best way to give payback for a cheap hit is to score a goal and win the game rather than responding with a cheap shot of your own. This type of meekness—disciplined, harnessed strength—allows one to strive for something greater instead of settling for a petty response. One who remains meek is able to see and think clearly and, as a result, is able to reach for higher things. Meekness is at the heart of the wise saying, “choose your battles wisely.” Because of Emmanuel—God with us—we are able to absorb the blows that life and those in our lives send our way, knowing that we have a greater weapon and a greater goal in life.

My child, perform your tasks with meekness; then you will be loved by those whom God accepts. (Sirach 3:17) 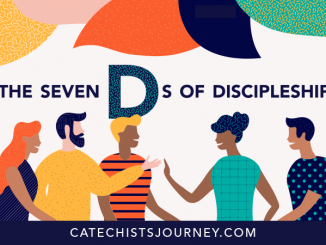 The Seven Ds of Discipleship: #4 Discipline

They All Talk At Once!