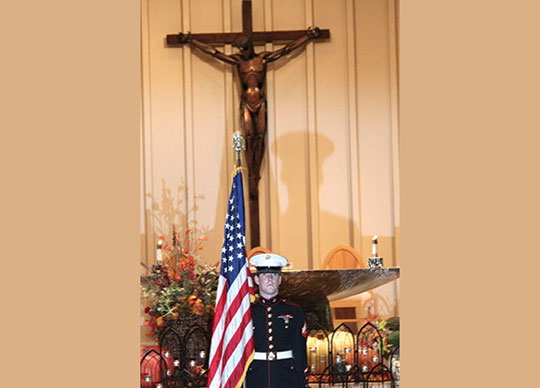 I was impressed by the Mass for Veterans that was celebrated at St. Barnabas parish in Chicago this past Sunday. Military personnel, past and present, from all five branches of the military were invited to participate in a rousing entrance procession complete with flags representing each of their branches. The music, which was splendid, was focused on the themes of marching and victory and peace. The homily, delivered by army chaplain Fr. Matt Foley, meshed the theme of the Scripture readings with the service of our veterans and our shared call to serve and sacrifice our lives for others. Before the closing procession, the choir led the congregation in singing each of the theme songs of the various military branches as their flags were brought once again to the front of the church for the closing procession.

I’m not sure I have ever seen such a high level of full, conscious, and active participation of the faithful in a liturgy.

This, of course, made me think.

Now, I’m not one for mixing patriotism too closely with the Eucharist. At the Eucharist, we pledge allegiance to God—Father, Son, and Holy Spirit—and to the Church and we ask God for blessings upon our country which, like all countries, is made up of unworthy sinners. Patriotic Masses often result in a “God is on our side” mentality, which can be  dangerous since the Eucharist calls us to be on God’s side.

However, I was struck by the imagery of marching into battle—an imagery that has been lost by the Church or co-opted by culture warriors. I’m not suggesting the kind of attitude that pits us against the world. I’m not a culture warrior and I don’t believe that’s what we are called to be as a Church. I’m even hesitant to talk about “battling the forces of evil,” because the tendency is for us to demonize others and identify them as the locus of evil. What I am talking about is going into battle, armed with mercy, to fight the forces in our world that lead people into despair.

The Eucharist, like this Mass for Veterans that I described, should be a “call to arms” and a celebration of our alliance with the victorious Jesus. In his Letter to the Ephesians, St. Paul reminds us that we are indeed going into battle but armed with a new set of weapons, the “armor of God”:

Therefore put on the full armor of God, so that when the day of evil comes, you may be able to stand your ground, and after you have done everything, to stand. Stand firm then, with the belt of truth buckled around your waist, with the breastplate of righteousness in place, and with your feet fitted with the readiness that comes from the gospel of peace. In addition to all this, take up the shield of faith, with which you can extinguish all the flaming arrows of the evil one. Take the helmet of salvation and the sword of the Spirit, which is the word of God. (Ephesians 6:13–17)

In many evangelical churches, there is a tradition of an “altar call,” which is an appeal for an immediate public response to the sermon. In the Catholic tradition, I suggest that the time reserved for announcements after Holy Communion take on this flavor: inviting people to come forward and respond to the call to visit the sick, bring Holy Communion to the homebound, serve the needs of the poor, the hungry, the homeless, and the incarcerated, protect life, minister to the bereaved, and so on. We should be inviting people every week to join in these efforts and not just by saying, “There will be a meeting on Tuesday night…” We need to liturgically recruit people to live the Eucharist in their daily lives and to send them forth in dramatic fashion because the Works of Mercy are indeed dramatic.

Occasionally, all of these ministries should gather at a celebration of the Eucharist and march in procession led by banners. They should be commissioned to go forth to battle the forces that lead people to despair and, armed with mercy, bring hope.

In Catholic Tradition, we speak of the “Church Militant” referring to us Christians on earth who are called to battle against sin. In my opinion, this phrase has been co-opted by culture warriors who see it as a call to a battle of political ideologies. I think the Church needs to reclaim this notion of the Church Militant as a call to put on the armor of God and to battle the forces of despair with our chief weapon: mercy. The Eucharist needs to be seen as a call to action. The Church needs to be seen as a movement. The New Evangelization needs a new “triumphalism”—not one that trumpets our superiority over others, but the superiority of God’s mercy over despair and hopelessness.

This is precisely why, at every Mass, we “lift high the Cross”—our symbol of God’s victory over sin and death, which leads us into the celebration and then back out into the world and into battle!

Bishops – Under the Influence of Jesus