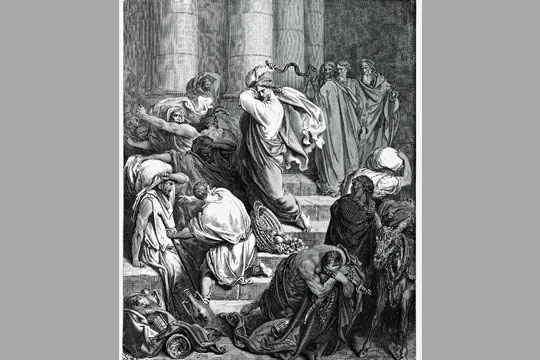 One of the things that I enjoyed most about teaching sixth grade with a focus on the Old Testament, was using Old Testament themes to help the kids understand concepts of our Catholic faith. One particularly successful example was a lesson I did about the Real Presence of Christ in the Eucharist, drawing from the Old Testament example of the Jewish people recognizing the Temple as the locus of God’s presence in their midst.

I began by engaging the young people in discussion about times in our lives when we feel alone and abandoned and wondering where God is during those difficult times. I then linked that to the ways that the Jewish people felt alone and abandoned during their enslavement in Egypt. After reviewing the Exodus story and the giving of the Law, we eventually reached the topic of Solomon’s Temple and how the Jewish people saw that as the focal point of God’s presence in the world. The climax of the lesson came when we read the story of Jesus cleansing the Temple (John 3:13–22) and I emphasized that Jesus was not just upset with some merchants selling stuff in the Temple but was rather showing that Temple worship was being replaced by Jesus himself—the new Temple of God.

We then talked about the Real Presence of Jesus in the Eucharist and after that headed over to the church for Eucharistic Adoration. The lesson was a good example of a number of themes and moving parts coming together into one cohesive lesson, one that I am very proud of! Here it is: God’s Presence—Solomon’s Temple and the Temple of the Holy Spirit. This lesson was based on Finding God: Our Response to God’s Gifts, Grade 6, Session 11.