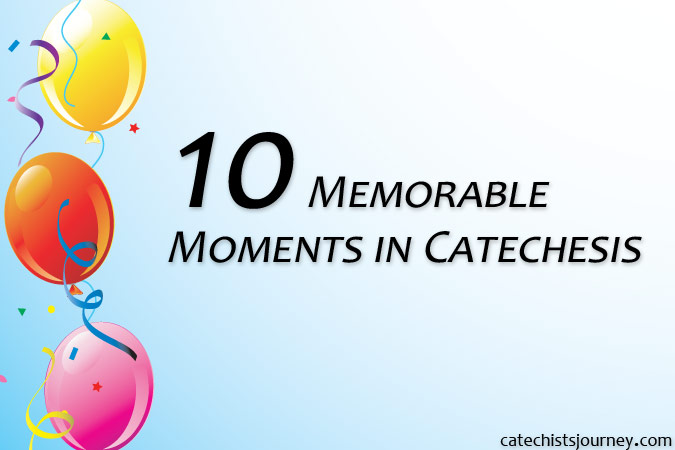 Editor’s note: Today we kick-off a celebration of our 10th anniversary here at Catechist’s Journey. Ten years ago, Joe Paprocki started writing about the joys and frustrations of his classroom catechetical experiences. Since that time, we’ve welcomed a group of regular contributors to this blog to share their wisdom and experiences in the field of religious education. In honor of our anniversary, we’ll have special posts all this week and next Monday (the actual anniversary date) with the theme of “10 things.” We’ll also have some special daily giveaways; see the bottom of this post for your chance to win a Saints Stories package from Loyola Press.

To start our online anniversary party, we asked our contributors to share their most memorable moments in catechesis. Some are funny; others are touching. All are real stories from experienced catechists and catechetical leaders.

Teaching young people the art of reflective prayer is not easy. They are not accustomed to silence. And yet, while they seemingly fight against my efforts to invite them into quiet, sacred space, they also are attracted to it and begin asking for more. One of my favorite catechetical moments occurred while teaching eighth graders and leading a guided reflection late in the year. With each week, the kids had grown more comfortable with this approach to prayer and their behavior was gradually improving. On this particular evening, they seemed to get into the “zone” and, as I finished up the guided reflection, you could hear a pin drop. I slowly and quietly walked around the room as they spent some quiet time with Jesus and felt the presence of the Lord in that sacred space. It was an experience of heaven on earth and I thought to myself, “This is why I became a catechist!”

Sometimes catechists need to hang on to their sense of humor. During my second year as a sixth-grade catechist in the early 90’s, I taught six reasonably well-behaved girls and six mischievous boys (one of whom was my younger son), who sat in the second row and often challenged me with their fidgety antics.

One Sunday morning I turned around to write on the chalkboard, and when I turned back, there were six empty chairs! In a split-second, the boys had silently gotten up and opened the back wall’s parallel doors—which concealed an area for hanging coats—and hidden themselves. After a few seconds of my stunned silence, the children broke out in laughter and the boys reappeared, taking their seats amid a storm of giggles. Needless to say, I didn’t turn my back much after that—and I redoubled my efforts to keep the class interesting!

I once had a first grader correct me in the middle of a discussion about Baptism. She adamantly insisted that the sacrament is actually called “bathtism.” She had recently attended the “bathtism” of her baby brother and had witnessed the priest pour water over his head to wash off all of his bad stuff so he could be squeaky clean. He was even given a towel to dry off afterwards.

Her misunderstanding of the word “Baptism” showed me her full understanding of the sacrament. This moment reinforced the importance of empowering the domestic church. This student had clearly had a rich conversation with her parents before her brother’s Baptism, and she had made important connections between her experiences at home and at church.

In Ireland, parish religious education doesn’t exist, because all religious instruction is handled through the school system. So it was quite a Holy Spirit surprise to find myself in Wisconsin ministering as a catechetical leader and catechist! On the first night of religious education, I was introduced to the parish as “Julianne, our Irish sister in Christ.” Walking to the 10th-grade room for the first time my heart was racing. I wanted these students to love the Catholic faith as much as I did. I opened my class with the lyrics of a popular song and related it to the evening’s lesson. Some of the students burst out laughing! “What’s so funny?” I asked. “We didn’t think that ‘sisters’ listened to pop music,” one of them replied. Sister. Yes, my 10th-grade class thought that I was a religious sister from the order of “Irish Sisters in Christ”!

When I first started as a catechist I was in high school, teaching a Kindergarten class with a friend. At the end of each session all of the children gathered together in the church for prayer, and a representative from each class got to tell the rest of the group what they learned that day. No matter how much I coached my little Kindergarteners, when they would stand in front of the group, they would freeze and hesitantly say, “God loves us?” I was frustrated and embarrassed that everyone would think I was not teaching the children anything! But my director told me that they were in fact learning the most important lesson of our faith: the love of God.

I was at a Confirmation retreat, and I overheard one youth say to another, “I’m learning how to make my faith my own.”

That sentence has been my guiding principle as I continue to serve in this ministry. My goal as a catechist is to give young people the tools they need so they can make the faith their own. Of course, to do that, they need to know the facts about our faith. But that is just the starting point. I want to teach them how to recognize the Holy Spirit’s activity and presence in their lives, and I want to teach them how to respond to God’s call.

I was still teaching fourth grade when I led a Scripture-search activity. One of the boys in my class was excited to find a book of the Bible named after him: Timothy. His twin brother looked briefly excluded, until I pointed him to the Old Testament, where he found his namesake book: Daniel. The two boys were so excited to find their names in the Bible, that they were more enthusiastic about the session that day, and they raised the fact a few more times during the year. It was a cute incident that highlighted for me the importance of making a personal connection to the material in order for our students to embrace it.

During my first year as a catechist and feeling a bit inadequate in my teaching skills, I ran into a parent from my class at the grocery store. She told me they typically had a battle in her home over going to faith formation class. This year she was so happy her child had me as a teacher, because he wanted to attend my class every week. No more battles. She thanked me for making it enjoyable for both her child and their family. That was a message I really needed to keep me going as a new catechist.

Each year our school has a food drive. My most memorable teaching moment surrounds this time of year. I always show my third graders the woodcut by Fritz Eichenberg called Christ of the Breadlines. We talk about what and who we see in this woodcut. As the children make the connection with the artist’s view of Jesus among the people, I share a story. When my husband and I were first dating, our early “dates” involved volunteer work at our local homeless shelter. One Sunday morning, we were helping our friend Bill make pancakes for breakfast. It was a big crowd on this particular morning, and the dining-room host came in with a panicked voice, “We need more chairs!” Bill was using the last folding chair to hold his large pot of pancake batter. As the host reached for this chair, Bill said, “Stop! I must clean this chair up from all the batter spills. Our Lord will be sitting on this chair!”

The story makes an impression on my students. They don’t expect those words from Bill (as I didn’t), and they think about the people to whom they are giving their canned goods.

A favorite day for many of our first graders happens about mid-way through the religious ed class year, the day on which we bring our youngest students on a tour of our church. On one such occasion a couple of years ago, I had a particularly precocious group with me. These little ones were obviously well familiar with the church. Rounding the corner as we left the sanctuary, we came across the tabernacle. After having each child genuflect in front of this wonder, I asked the group, “Does anyone know what this is called?” Jon’s hand immediately flew up as he danced around to get my attention. “Ooo, I know! I know!” After I motioned toward Jon to call on him, he immediately exclaimed, “I learned this last summer! It’s called the tackle box!” Almost, Jon, almost!

What’s one of your most memorable moments as a catechist?

Thank you for celebrating the 10th anniversary of Catechist’s Journey with us. Giveaway winners have all been notified.

Stories on the Journey – Week 2: Kids Say/Do the Darndest Things

Stories on the Journey – Not Bad, If I May Say So Myself!

Kids Say and Do the Darndest Things – Stories on the Journey

3 Comments on 10 Memorable Moments in Catechesis