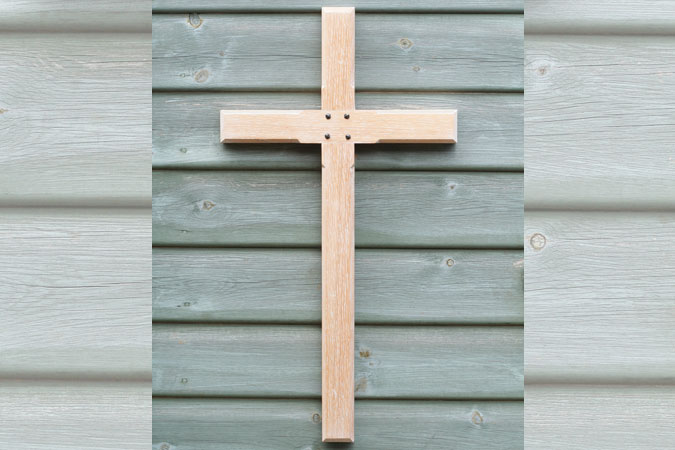 One of the most profound and reverent moments of the Triduum is the Veneration (Adoration) of the Cross that takes place on Good Friday during the Celebration of the Passion of the Lord. In this ritual, all in the assembly are invited to come forward to reverence the cross, usually by genuflecting or bowing and kissing or touching the cross.

Why do we reverence or adore an instrument of death? Because, for us, it is a symbol of victory! Through his Cross and Resurrection, Christ has redeemed the world, defeating sin and death once and for all.

Today, we use the word trophy to indicate a symbol of ultimate victory. When a team wins a championship, fans from that city can’t wait to be in the presence of the championship trophy, to touch it (if possible) and be photographed with it (such as this picture of me and my friend Todd Williamson with the World Series trophy after the Chicago Cubs ended 108 years of misery and claimed victory!). When the trophy is held aloft in the victory parade, fans cheer wildly, claiming the victory as their own.

I have often said that, if I were made pope for a day, I would make one change to the liturgy: I would have the assembly applaud as the processional cross is carried in and out at the beginning and end of the Mass. We have unfortunately reduced the cross to an ornament. While it does lead our processions, it enters and leaves as though it is an honor guard for those who follow it, namely the presider. Instead, the appearance of the cross should be treated in the same manner as the Torah, the Scroll of the Law, is welcomed and reverenced when it enters and leaves a synagogue. Notice in this video how people touch the scroll as it is carried in procession.

As a catechetical leader, you can bring this level of reverence for the Cross to all of your faith formation gatherings. You can begin all of your gatherings by having a procession of the cross, training cross-bearers to slowly walk with a processional cross and to lower it so that members of the assembly can reach it. Those participating in the gathering can be invited/trained to step out from their seats and reverence the cross by touching it.

I can picture little children creating a “traffic jam” in their efforts to be one of those who gets to touch the cross. And I think such mayhem would be a glorious catechetical lesson about the importance of the Cross!

May your Triduum be filled with blessings and may we glory in the Cross of our Lord—God’s trophy of victory over sin and death!

Knowing How the Story Ends, Changes How You Experience the Story