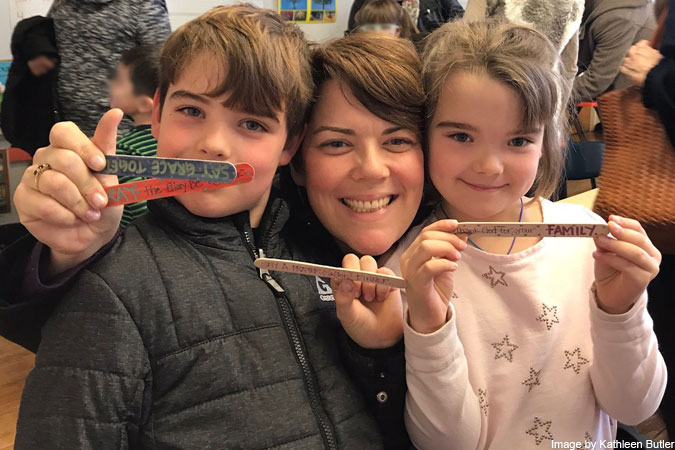 Last winter, a teacher friend of mine posted a photo of her classroom showing her “task sticks” for her students. On each stick was written a specific task for the student who held it, such as “line leader,” “pencil patrol,” and “librarian.” I was trying to think of a way to engage my class in prayerful habits during Lent when I saw her task sticks. I thought I could borrow her idea and make “prayer sticks!” I already use inexpensive craft sticks for all kinds of things in my religious education class, and I have a collection of markers, so I had everything I needed.

I decorated an empty plastic jar with colorful purple tape to hold the prayer sticks. I then decorated about 25 sticks and made a different set for each week of Lent. I wanted the class to draw something different each week, so I made a variety. Since I wasn’t going to ask the children to return the sticks, I made lots of extras. Each stick had a specific task written on it, such as, “Pray for your grandparents,” “Pray for our soldiers,” “Pray the Hail Mary with your family,” or, “Thank God for five things.” Some of the suggestions weren’t prayers; they had tasks such as, “Care for a plant this week,” “Listen to a song about Jesus,” or, “Show love to a pet.”

I introduced the prayer sticks at the end of class during our regular prayer time, and I explained how to use them. My students were immediately intrigued. Everyone drew a stick from the jar and read it out loud so everyone could find out what each person’s stick said. It made for good conversation around the circle. One girl’s dad was in the military, so she liked the idea of praying for soldiers. The children thought the idea of saying a prayer after a meal sounded like fun. After that first day, I was pretty happy with this idea, but I was not prepared for what came next.

My students wanted sticks for their siblings. One boy asked for a different one because his stick said, “No whining this week,” and he was already doing that for Lent. One girl wanted to change sticks because she’d pulled the same stick the week before, and she wanted to try something else. One family kept their sticks in a jar on the table and used them every night at dinner. One boy and his mother used the sticks to start a new bedtime prayer habit. One week I forgot to place the jar out, and the students were adamant that we stay in class a few extra minutes to get our prayer sticks. 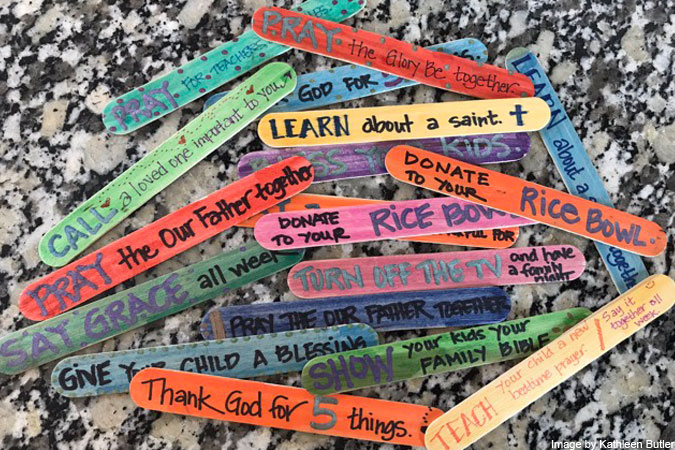 The prayer sticks completely exceeded my expectations. I had a lot of fun seeing my students embrace a new way to encounter Christ in prayer. This exercise helped them see how easy it is and feel comfortable doing it. The family involvement was a great—and unexpected—way to include parents in the classroom.

Help children learn how easy it is to pray every day with the Loyola Kids Book of Everyday Prayers. 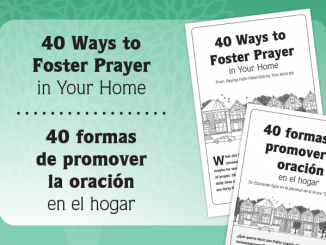 40 Ways to Foster Prayer in Your Home 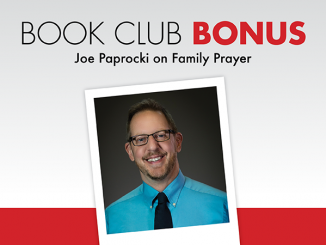