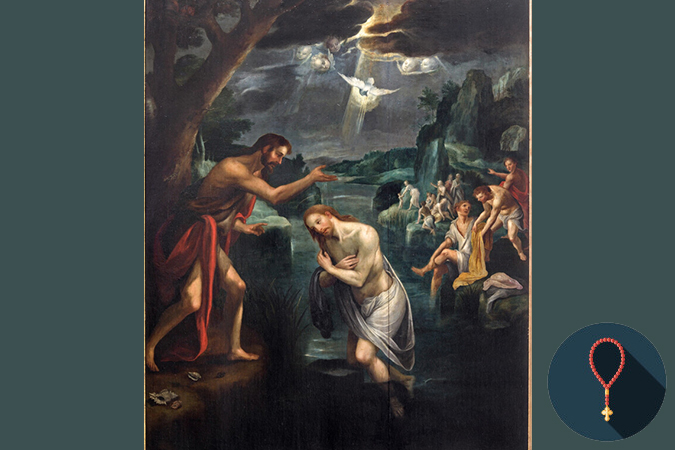 As we enter into the last months of Ordinary Time, let’s reflect on the Luminous Mysteries of the Rosary over the next few weeks. In 2002, St. Pope John Paul II proposed a fourth set of mysteries—the Mysteries of Light, or Luminous Mysteries, which cover events in the life of Jesus and Mary during the Lord’s public ministry.

The First Luminous Mystery is the Baptism of Jesus in the River Jordan, an event which was recorded in the synoptic Gospels (Matthew 3:13–17; Mark 1:9–11; Luke 3:21–23). In John’s Gospel, we hear John the Baptist speak of Jesus and describe seeing the Spirit descend upon him “like a dove” (1:32), but the evangelist does not specifically record the event of Jesus’ baptism.

While the “highlight” of this event is the Holy Spirit descending upon Jesus in the form of a dove and a voice from heaven saying, “This is my Son, whom I love; with him I am well pleased,” (Matthew 3:17, NIV) I’d like to draw attention to another lesser-known fact about the baptism of Jesus.

Although I’ve not visited the Jordan River, from all accounts of people who have, the waters of this river are “mucky.” This murky, muddy river flows from north to south, originating above the Sea of Galilee and running from there into the Dead Sea. It forms the boundary between Israel and Jordan. One might think that John would have chosen a sparkling spring in which to baptize people, washing them clean of sin. Instead, he welcomed people to enter into the muck. In a sense, the muck represented the sinfulness of human beings, polluting the waters of the Jordan River.

And it was into this “muck” that the Son of God chose to enter!

Jesus did not need to be baptized, since he was without sin. However, he chose to enter into the muddy, dirty, mucky waters of the Jordan to show the lengths that he was going to join our humanity. When the “Word became flesh,” he chose to be all in. God got his “fingernails dirty.” God got the “smell of the sheep.” The baptism of John was not so much a cleansing of sin, but rather, the admission and accepting of one’s sinfulness and reliance upon God for salvation. In Baptism, one does not emerge from the waters of one’s own power, but rather, one is pulled out—saved—by another. For us, that Savior is Jesus Christ.

Jesus entered into humanity and did not tiptoe around us. He humbled himself and become one with us. As we recall and reflect on the Baptism of Jesus in the River Jordan, let us be thankful for the nearness of God through the Incarnation. Let us not stand on the shoreline pretending to be pure, but rather, imitate Jesus and enter into the muck from which the grace of God alone can save us. 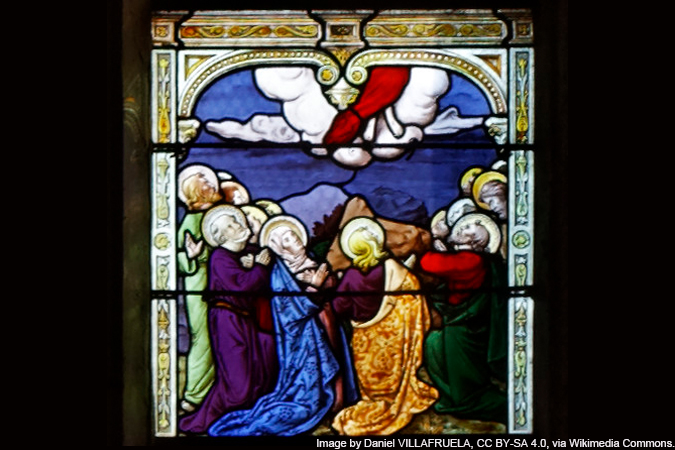 The Glorious Mysteries: The Ascension and Accompaniment 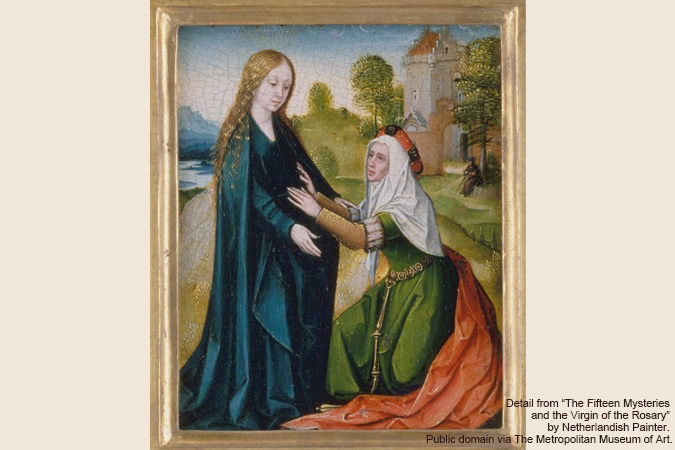 The Joyful Mysteries: The Visitation and Stirring Up Life 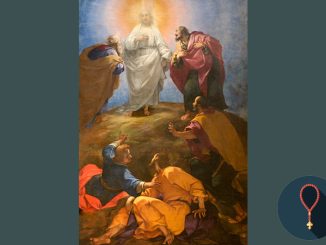 The Luminous Mysteries: The Transfiguration and Our Desire for the More

2 Comments on The Luminous Mysteries: The Baptism of Jesus and How God Entered the Muck