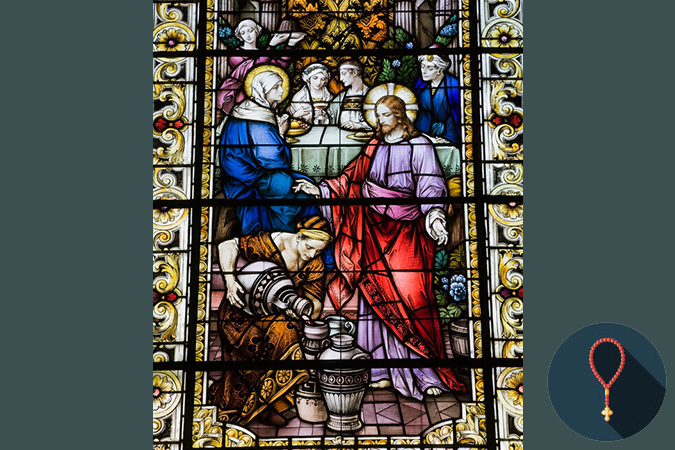 We continue our reflections on the Luminous Mysteries. Today, we focus on the second Mystery of Light, which is the Wedding Feast at Cana.

Perhaps one of the most striking images of God’s generosity and what I like to call a “banquet mentality” can be found in the story of Jesus’s first miracle at the wedding at Cana (John 2:1–11). Jesus, his mother, and his disciples were attending a wedding feast in Cana when the bride and groom ran out of wine. Jesus’s mother, Mary, nudges him to do something to remedy the situation and, being the obedient son he is, Jesus does just that: he instructs the servants to fill six stone jars with water and then to draw some out to take to the head waiter. Somewhere along the way, Jesus turns that water into the finest wine. Now, that is miraculous enough. However, it is striking that the story tells us that each of the six stone jars held 20 to 30 gallons. That’s between 120 and 180 gallons, or the equivalent of over 900 bottles of wine.

That’s a lot of wine!

The point of this story is that, in God’s kingdom—which is often depicted in Scripture as a banquet—there is an overabundance of goodness! There is, indeed, enough to go around, several times. God’s kingdom is marked by extravagance and abundance, and through Jesus Christ, this kingdom has burst into our midst. We are called to share generously this abundance with everyone.

Our culture, on the other hand, tends to promote a “scarcity mentality” rather than an “abundance mentality”—terms coined by the late Stephen Covey in his book The 7 Habits of Highly Effective People. According to Covey, scarcity mentality can be thought of as picturing life as a pie that can be sliced up only so many ways before it’s all gone. Thus, if some people take bigger pieces, that means everyone else will have less. This scarcity mentality is especially prevalent in the corporate world and in capitalism per se. Think of how many ads create a sense of urgency, telling us that we need to “buy now” or forever miss this once-in-a-lifetime opportunity.

The late psychotherapist, lecturer, and author, Dr. Wayne Dyer often explained that to have a scarcity mentality means to evaluate our life in terms of its lacks. He said that if we dwell on scarcity, we are putting our energy into what we do not have, and this continues to be our life experience. An abundance mentality, on the other hand, believes that there is enough to go around; there is an endless universe to work in, and we are part of that endless universe.

God seeks to share with us abundantly. In the Christian tradition, the climax of this self-sharing was the sending of his only Son, Jesus, to become one of us. Generosity—the selfless sharing with others, especially with those in need—is more than a feeling; it is a disposition and a noble way of proceeding in life. We can become more fully human and tap into divine energy by selflessly sharing our time, talent, and treasure with others.

May we approach life with a banquet mentality, recognizing the abundance of graces that we are blessed with and sharing them generously with others.

With the hands-on Praying the Rosary kit, children use manipulatives to learn to pray the Rosary.

The Luminous Mysteries: The Institution of the Eucharist and an Excellent Choice

1 Comment on The Luminous Mysteries: The Wedding at Cana and a Banquet Mentality