As we began class on Monday, I pointed to the prayer center and asked, “Does anyone notice anything different?”

After a short pause, one of the girls pointed to the purple cloth and said, “There’s purple for Advent.”

I complimented her on being so observant and then asked, “So, what does the word Advent mean?”

No one knew (or at least no one volunteered an answer!).

Then, I gave an example. Our aide, Ben, had arrived a few minutes late that evening so I asked, “What does it mean if I said that a few minutes ago, we were awaiting the advent of Ben?” That clicked for them: “arrival,” “coming,” they shouted (yes, they tend to shout out answers…to be more polite, they raise their hand and shout out simultaneously!)

I said “Exactly! Now, whose coming are we waiting for?”

“I thought he already came,” I replied.

“Of course Jesus has already come and we look forward to celebrating that at Christmas. But we also believe that he will come again. You know…Christ has died, Christ is Risen…”

It clicked again for them: “Christ will come again!” several blurted out.

“Exactly!” I replied. “We believe that Christ will come again. In the Creed, we say, ‘He ascended into heaven and is seated at the right hand of the Father. He will come again in glory to judge the living and the dead…'”

They had that look of “Oh yeah, I’ve heard that before.”

I continued, “The priest also says, ‘In your mercy Lord keep us free from sin and protect us from all anxiety as we wait in joyful hope for the coming of our savior, Jesus Christ.'”

I explained that, because Jesus has already come, our waiting for his second coming is joyful and confident. This is not wishful thinking (like waiting for the Cubs to win the World Series!) Our hope is confident, especially because Jesus is present with us while we wait for his return in glory.

From there, we spent a chunk of time looking at the virtue of hope and how Advent is a season of hope. However, I wanted to share that exchange above because it is very typical of the kind of give-and-take that I have with the kids. Rather than just state information, I like to lead them to it so that as much as possible, they discover it themselves. I imagine this method can be described as somewhat “Socratic” – teaching through guided questioning. 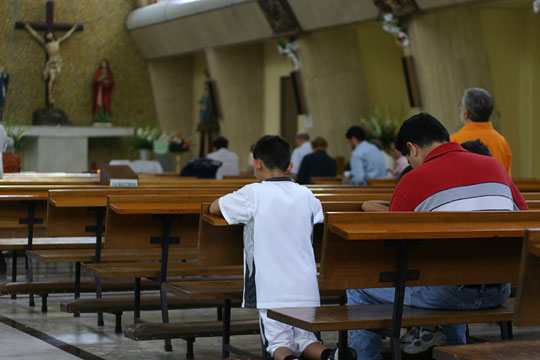 The Promise of a Superhero