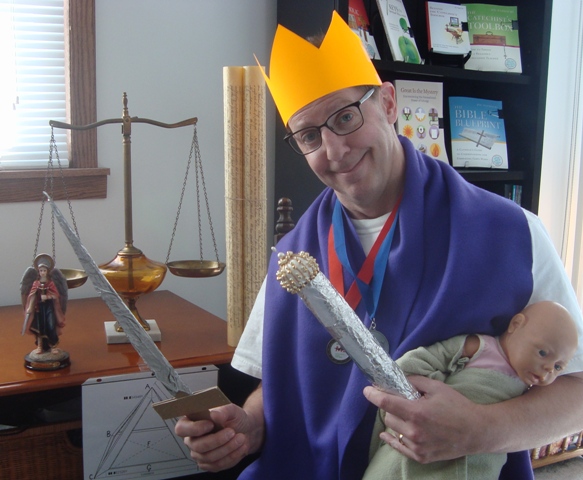 As a catechist, I rarely met a prop I didn’t like! Teaching sixth grade with its focus on the Old Testament gave me a number of opportunities to bring in a variety of props with which to engage the young people. One of my favorites was a lesson on David, Shepherd and King (Chapter 9 of Finding God), in which I brought in a bevy of props to help the young people understand the concept of the kingdom in the Old Testament and how crucial this is to our understanding of the Kingdom of God that Jesus proclaims in the Gospels.

The fun began with inviting a young person to put on a shepherd’s costume as we talked about David as a shepherd and then the imagery of Jesus as our Good Shepherd. Next, I did an activity which invited the young people to imagine they were king or queen for a day and could announce any reform they wished for the betterment of their kingdom. It was so refreshing to see how many of them addressed ending unemployment, hunger, poverty, war, and so on. The climax, however, was having the young people proclaim one of their fellow students as king or queen and then presenting that person with all of the symbols of their royalty (crown, scepter, throne, sword, and so on).

Not only did this lesson turn out to be much fun, but I think it really helped the young people to understand a number of concepts and terms that we use all the time in reference to Jesus. This is important for a culture that is very unfamiliar with the concepts of royalty and monarchy. Enjoy the lesson and allow yourself to imagine that you are king or queen for a day!

Extend the idea of being king or queen for a day to a lesson on Catholic Social Teaching by downloading a free lesson plan here.