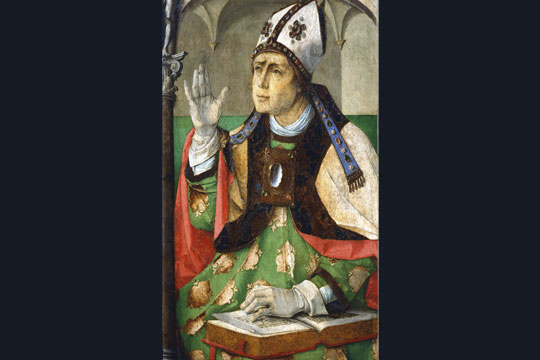 Other than my patron saint, Joseph, and St. Ignatius of Loyola, few saints have inspired me as much as St. Augustine, whose feast we celebrate today. When I was a student at St. Ignatius College Prep in Chicago, I studied Latin for four years and also took an elective on The Confessions of St. Augustine. The class consisted of five or six of us students translating the Confessions from Latin to English line by line under the watchful eye of Mr. Donald Hoffman. This strange little class took place during the lunch hour, so we actually were eating our sandwiches as we translated this great work. While it was very tedious and often boring, I was captured by many of Augustine’s profound thoughts, not the least of which is his famous saying, “Our hearts are restless, Lord, until they find rest in you.”

Here is a list of quotes from the Confessions that I thought you might enjoy reading today to mark his feast.

Here is a brief summary of the life of St. Augustine of Hippo from the Midwest Augustinians.

Here is a brief video reflection on St. Augustine from Cardinal Dolan.

Finally, here is a nice article by my friend, Dr. Michael Cameron, entitled, “Who was St. Augustine and Why Should I Care?” from U.S. Catholic.

Pop-Up Catechesis: Our Hearts Are Restless

The Feast of the Assumption—A Blessing of the Body