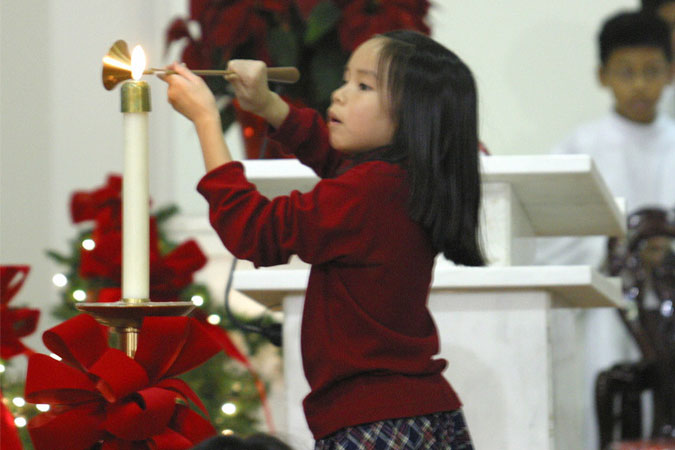 One of my favorite books in recent years is Thich Nhat Hanh’s Savor: Mindful Eating, Mindful Life, in which he introduces the concept of mindfulness—the practice of being fully present in each moment—as an approach to healthier eating and living. When we eat mindfully, we savor that which we are eating. To savor literally means to “give oneself to the enjoyment of.” It means to be mindful of that which we are eating and drinking—to unite body and mind in the present moment of tasting.

I can think of no better time to savor the Liturgy of the Eucharist than the Christmas season. In fact, the liturgical season of Christmas reminds me of a story of how a friend of mine, Georgia, chose to become Catholic. She was raised a Baptist but, at some point in her adult life, she attended a Christmas Midnight Mass. She told me how she sat there enthralled with the beauty of the liturgy and savored the sights, sounds, and smells of the celebration.

Too often, we approach (and teach) the liturgy as something that we passively attend, expecting to be “entertained.” We tend to think that the only people really engaged in the Mass are those who have “special” roles such as liturgical ministers. I propose that one of the most powerful ways that we members of the assembly can participate fully, actively, and consciously in the liturgy is by savoring the various elements of the Mass.

I came upon this insight recently as I sat in church waiting for Mass to begin. I watched the server lighting the candles next to the altar, and I found myself savoring the flame. At a recent funeral Mass, I found myself savoring the smell of incense. We can savor so many elements of the liturgy using all of our senses: sight, smell, hearing, touch, and taste. What are some of the things we can savor at Mass? I suggest the following:

If you are attending a Christmas liturgy with someone who is not a “regular” at Catholic Mass, invite that person to savor the sights, sounds, and smells (and for those who receive Communion, the tastes) of the celebration of the Eucharist. And throughout this Christmas season, may we taste and see the goodness of the Lord, savoring the flavor of grace among us!

Experience the goodness of God with your five senses with help from Taste and See by Ginny Kubitz Moyer.

New Roman Missal – What You Need to Know

Year of Faith Retreat – Week 2, Day 1: Aligning Ourselves with God (Worship and Liturgy)

2 Comments on Taste and See: Savoring the Liturgy