Yesterday, I gave a couple of little tidbits (Ave Maria activity and a humorous comment from a student) about this past Tuesday’s session so now I thought I’d give a more detailed summary.

All in all, it was a very satisfying session…tightly focused on one big idea and with a prayerful climate. 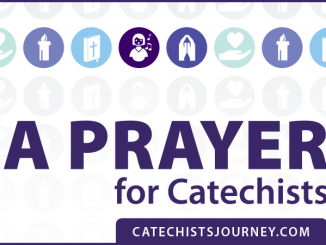 A Prayer for Catechists: The Power of Prayer