Advent is, above all else, a season of hope – a virtue that is all too rare in our world. To live as a person of hope is to behave in such a manner as to draw suspicion that we are behaving somewhat erratically as far as worldly norms go. This new type of behavior – what some may even call erratic behavior (the behavior that led people to conclude that the Apostles were “under the influence” on Pentecost) – is characterized by 9 attitudes. I call them 9 Advent Attitudes. Today, we look at Advent Attitude #7. (Drawn from my upcoming book, Under the Influence of Jesus: The Transforming Experience of Encountering Jesus.)

“Oh, to hell with it.” That’s an interesting phrase. We use it when we feel like quitting – like giving up. We use it when we don’t feel like it’s worth giving an honest effort at a particular task. So why do we send the idea to hell? No doubt, it is because hell is thought of as that “place” where there is no hope. It is no secret that life is full of challenges and obstacles that can often lead us to despair – to an “Oh, to hell with it” attitude. Advent is the antidote to this sentiment. Because of Emmanuel – God with us – we are compelled to never give up and to always have hope because we are not alone.

And that brings us to our next Advent Attitude: Staying on Message (even and especially under duress). Of course, some people are better at this than others. No matter how dire the circumstances are, they seem to be able to stay on focus, continuing to believe that what they are doing will bear fruit.

A brilliantly hilarious (albeit graphic) example of this never-say-die attitude is portrayed in the classic comedy film Monty Python and the Holy Grail. If you can stomach it, watch the following and you’ll know what I mean (warning: language and violence).

Now that’s staying on message! Of course, that’s a comedy. What about in real life? Perhaps the best example I ever encountered of this unshakable faithfulness was Fr. Larry Craig who did prison ministry for many years in Chicago before his untimely death in 2006. Once, when I took a group of Catholic high school students to visit him, a student asked him how many lives he had “turned around” in his prison ministry. Fr. Craig said, “Let’s see…I’ve been doing this for 15 years…about 5000 inmates….probably 6. Next question.” I interrupted and asked him how he is able to motivate himself given such a low “success rate” to which he replied, “I do it because it’s the right thing to do. Jesus said ‘when I was in prison you visited me.’ Next question.” Now that’s staying on message in the real world – in the kingdom of God!

That kind of focus – of staying on message even under duress – is made possible by the Incarnation of Jesus, whose death and Resurrection reassures us that, if God can overcome sin and death, he can and will overcome anything.

But you, keep your head in all situations, endure hardship, do the work of an evangelist, discharge all the duties of your ministry. (2Timothy 4:5)

God Is Our Father 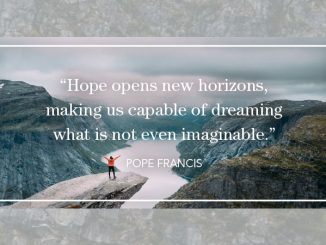 Hope Is Not a Feeling; It’s a Practice